As a former college coach and scout of female athletes, Temekia Morton understands firsthand the wide chasm that exists between these athletes and the career opportunities available to them in the US. In 2006, Ms. Morton established an organization to educate girls and women about domestic and international opportunities that exist for female basketball athletes post-graduation.  The organization also sought to empower the athletes to pursue those opportunities. After two years of successfully assisting numerous players to realize their dream through the Women’s Basketball Showcase, Ms. Morton founded a team in Greensboro, NC as an international touring team.  USA Elite later joined the WBCBL; Ms. Morton believed that her vision for assisting former athletes was shared by the league’s President, Willie McCray.

A native of North Carolina, Ms. Morton graduated from high school as a standout basketball player having garnered All-Conference and Female Athlete of the Year honors.  She continued her education at the University of North Carolina at Chapel Hill and earned a Bachelor of Science in Public Health in 1995.

After several years of working at UNC and coaching at the secondary school levels, Ms. Morton pursued a graduate degree and began coaching at the collegiate level at Augusta State University (now Georgia Regents University). Receiving her Masters degree in Education in 2002, Ms. Morton continued her collegiate coaching career at the University of North Carolina at Pembroke.  She is honored to have recruited and coached Danielle Richardson, Kodak All-American, Player of the Year and inductee into the Hall of Fame at UNC-Pembroke.

Ms. Morton is the owner and General Manager of USA Elite, a member of the WBCBL.  She has also served as Regional Director of the Carolinas Region in the league for the last several years.  Ms. Morton's current position as Vice President of the WBCBL will allow her to continue to assist players pursuing a career in basketball post-graduation. 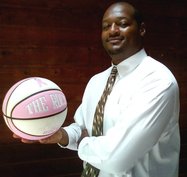 A small town native of Menifee, Arkansas, Mr. Willie McCray has always enjoyed being involved in sports. During high school and college, Mr. McCray stayed active as a 3-sport athlete in Basketball, Football, and Track.
After college, Mr. McCray went on to continue his playing career in professional minor league football and basketball from 1998-2002.

In 2002, he started a travel basketball club called the Dallas Diesel, which would play exhibition games against colleges and international teams during the fall and winter.

In November 2004, Mr. McCray founded the Women’s Blue Chip Basketball League as a developmental organization to aid female basketball athletes in their goals to become professional players through ministry and competitive play. The WBCBL provide players with top rate competition, exposure to pro scouts, and offers spiritual mentoring.
​
The birth of the Women’s Blue Chip Basketball League came from the fast growing popularity of the Dallas Diesel Basketball Club Women’s program sending players overseas to play professionally.
​
Today, the WBCBL has grown from 5 teams in Texas, into having teams in 23 states and totaling over 35 teams across North America.

​Kimberly Davis is a NBA and FIBA licensed sports agent and the Founder / CEO of Dream Makers Sports. The consulting company was founded to aid players in achieving their dream of playing basketball on the highest level possible. After leaving Law School, she realized that she wanted to become a Sports Agent, it was a dream she had while in undergrad at the University of Maryland. As life may have it, that dream was delayed as she worked several years in the Pharmaceutical Industry as a medical sales representative. She was led back to her own dreams and begin assisting players achieve their dreams of playing college basketball. She was one of the few women who have owned a NCAA Certified Scouting Service. She has worked with coaches abroad and in the US to secure scholarships for players.

The passion grew and she started working with her mentor in aiding his agency achieve endorsements for their players. Soon, many players were asking her to assist them find jobs overseas and thus she begin placing players overseas. She started working for the BK Sports Agency in France and worked for them for 2 years, and left to expand her own consulting company in July of 2015.
Powered by